Just another reason to the live the Montecito Lifestyle... 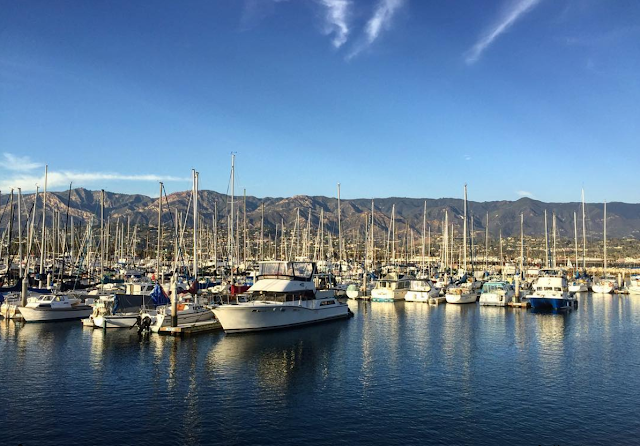 It should come as no surprise that Santa Barbara, city of superlatives, takes the fullest possible advantage of daylight saving time. When that extra hour of sunlight kicks in every year in March, our waterfront comes alive. At the Santa Barbara Yacht Club, daylight saving means it’s time for Wet Wednesdays, a popular event that routinely involves more than 60 vessels and hundreds of sailors. From mid-March until the beginning of November, SBYC members, their families, and friends gather on Wednesday afternoons to prep their boats, gauge the wind and tide, check the course, and make it across the line as close as they can to the sound of the starter’s air horn signal.

Affectionately dubbed “beer can races” by yachting insiders, weeknight races like Wet Wednesdays are booming all up and down the West Coast, and nowhere more so than in Santa Barbara, where the mix of serious racing and casual socializing brings out the fun in a sport that can otherwise be forbiddingly competitive. The unique venue—provided courtesy of the yacht club’s observation deck and the nearby Channel Islands—renders this picturesque setting ideal for spectators. At most yacht clubs, you have to go out on the water to really see the action; here it’s as easy as climbing a flight of stairs. Spectators are so close that the race committee—ordinarily holding down one end of the starting line in a launch—can run the entire event from the second-floor deck. 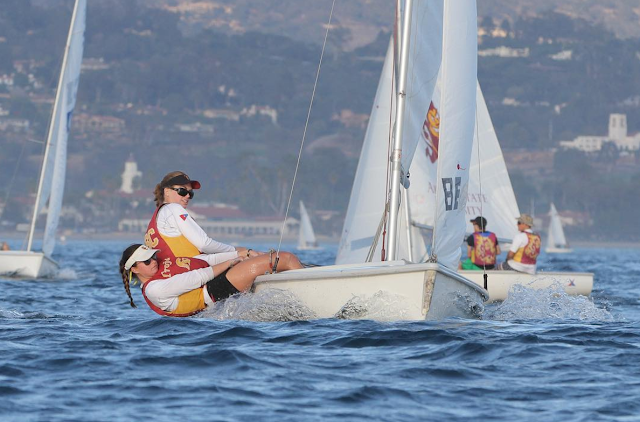 For race director Brad Schaupeter, who is also the head coach of the UC Santa Barbara sailing team, Wet Wednesdays are a test of concentration and focus as he stands on the second floor of the yacht club building with a pair of binoculars and a laptop, calling out the names and times of the finishers to a waiting team of club members who assist him by writing down the order and blowing the horn to signal to the boats that they have crossed the finish line. “Razzle Dazzle, Shantih, Grappa,” Schaupeter calls out, “Arrivederci, Free Enterprise.”
These are the fanciful names given to the latest in high-performance racing yachts by their equally high-performing owners. For example, when he’s not at the Neal Feay factory creating one-of-a-kind anodized aluminum projects for clients such as Louis Vuitton, Alex Rasmussen can be found on the water, skippering Free Enterprise, his 35-foot J/105. Radio host Dr. Laura Schlesinger is a regular at Wet Wednesdays, where she races Warrior in the club handicap division. 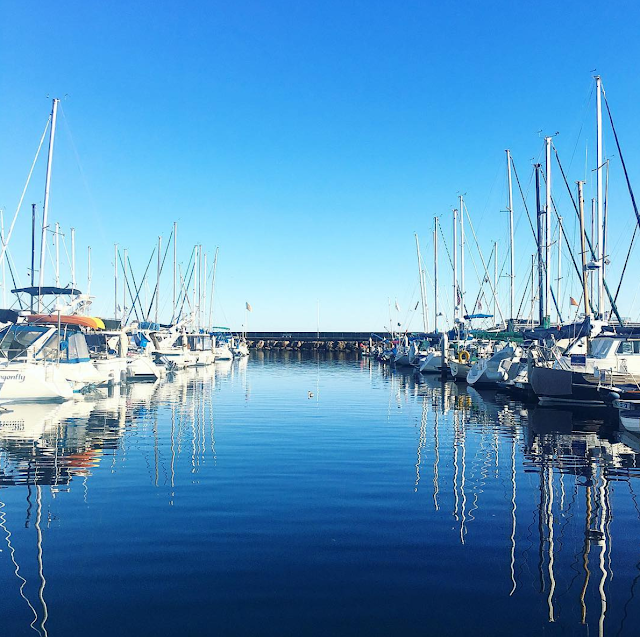 The original Santa Barbara Clubhouse was a 35 foot x 20 foot building at the foot of Stearns' Wharf. Originally the home of the John Stearns during the building of the wharf | Image - @clarajohannaliv

The big news of the summer is that the Santa Barbara Yacht Club was serving as headquarters for a new event, California Offshore Race Week, which took place from May 27 through June 4. The first leg took sailors from San Francisco Bay to Monterey, and the second from Monterey to Santa Barbara. When the offshore racers dropped anchor in Santa Barbara Harbor, they were invited to participate in Wet Wednesday, thus setting up the beer can race to end all beer can races. After that, it was on to San Diego, where the weeklong series finished.
When it comes to offshore racing, one yacht stands out from the rest of the Santa Barbara fleet— that’s Taxi Dancer, the bright yellow, 68-foot custom “sled” owned and raced by Tom Parker, Jim Yabsley, and Dick Compton. Always a threat to win Southern California’s top ocean contests, Taxi Dancer placed third in the Maxi division of this season’s Newport to Ensenada race that took place on April 25. Yabsley grew up sailing in the Santa Barbara Harbor, and he’s proud of the all-volunteer crew that keeps Taxi Dancer competitive against the hired guns who man archrival Roy Disney’s maxi-yacht Pyewacket. Defining the Santa Barbara style of community sailing against Disney’s more commercial approach, Yabsley says, “The day I start having to pay people to sail is the day I stop racing.” 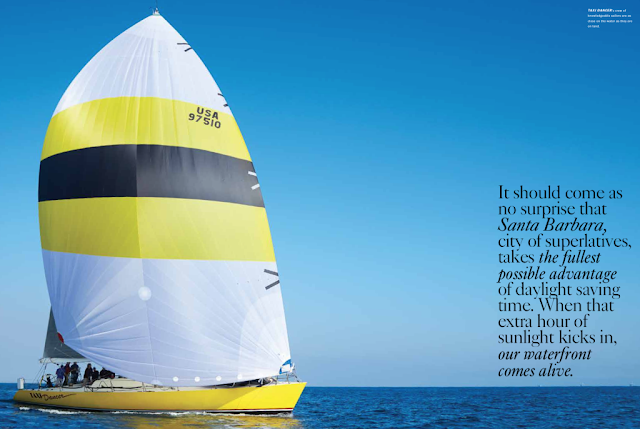 Taxi Dancer’s crew of knowledgeable sailors are as close on the water as they are on land | Image - Michael Haber
Of course there’s more to sailing than just going fast. At Skip Abed’s Santa Barbara Sailing Center, you can charter everything from stand-up paddleboards and kayaks to ocean-worthy cruisers with comfortable staterooms, professional skippers, and even a sea- going chef. For Abed, it’s having the Channel Islands so close by that makes exploring our coast “like stepping back in time.” Whether you go for a day or a week, Abed assures that setting out from Santa Barbara means “sailing the best cruising grounds on earth.”