SANTA BARBARA, California; September 28 , 2016 – Acme Hospitality, owners and operators of an innovative collection of boutique food and beverage concepts in Santa Barbara, announce the opening their highly anticipated Spanish restaurant, Loquita on September 28, 2016. The restaurant is located in the downtown Waterfront District at 202 State Street on the corner of Yanonali, the gateway to the Funk Zone.

Loquita, an endearing Spanish colloquial term for a wild, fun loving young girl, is a playful love letter to the history of Santa Barbara. “Our city’s rich colonial history has defined us in ways that span architecture, food, wine, and even informs our community celebrations,” comments Sherry Villanueva, Managing Partner for Acme Hospitality. “It’s the right time to dedicate our next restaurant to the incredible culture and food that Spain is known for, but interpreted by a contemporary California sensibility that is our company’s signature.”

Leading the culinary team is Executive Chef Peter Lee, with an impressive resume that includes most recently the award-winning Jöel Robuchon in Las Vegas and earlier stints at Gusto and Osteria Mozza in Los Angeles. Skyler Gamble, recruited from The Lark where he has worked since its opening in 2013, oversees front of house operations as Loquita’s General Manager. 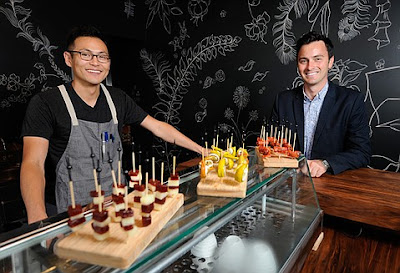 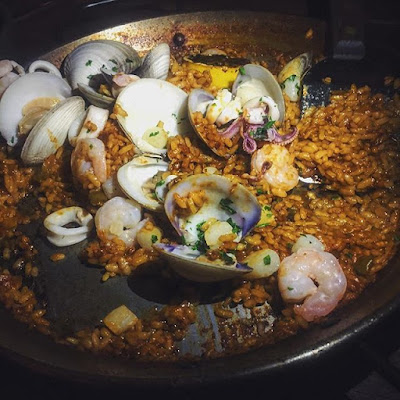 The wine list is comprised almost entirely of Spanish wines as well as exceptional local wines that pair well with the cuisine. Loquita’s cocktail list features a selection of Spanish vermouths, farmers’ market Sangria, hand-crafted cocktails and the de rigueur offerings of gin-and-tonics, the king of the cocktail in Spain.  The Mediterranean climate and terroir of Santa Barbara County mirror that of Spain, making the translation of locally sourced produce, meats and seafood an ideal match

Complementing the food and beverage is the alluring Loquita environment. One enters Loquita from State Street under hand-forged iron awnings crafted from vintage tree-surrounds to discover a kaleidoscope of imagery and detail that is both evocative of Old Spanish Santa Barbara and the contemporary city of today. Influenced by history but inspired by modern Spain, Designer Doug Washington (The Lark, Lucky Penny, Les Marchands, Santa Barbara Wine Collective and Helena Avenue Bakery) with contribution from Santa Barbara local Stephanie Greene Fuller, has orchestrated another masterful setting with his imaginative touch. The restaurant’s interior space consists of multiple dining areas – the bar, the sixty seat interior dining room, Poquita Pintxos Bar, a 60 seat outdoor patio and private dining room for up to 34 guests.

The expansive walnut bar separates the dining area with a matching stand-up counter anchored by solid columns, creating a naturally defined space for imbibing and socializing. Antique mirrors handmade by local artisan Phil Brainard are set in massive hand-carved wooden and gold gilded Baroque-style frames made exclusively for Loquita by the Ramos family in San Antonio, Texas in the traditional designs of old Europe. The framed mirrors give a nod to the Spain of earlier days while adding warmth to the back of the bar. Solid walnut posts and brass hardware secure the twelve leather tufted barstools to the floor, fashioned by Santa Barbara artisans Peter and Andrew Hernandez of Brothers of Industry. The kitchen is framed by a walnut-wrapped picture window showcasing state of the art equipment and wood-burning grill and includes a six-seat Chef’s Counter, allowing guests to dine in the front row, observing the chefs at work close-hand. 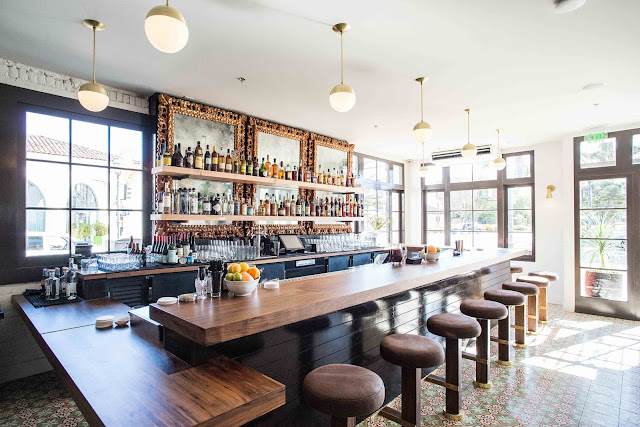 Down the hallway is Poquita, a separate pintxos bar (to be opened at a later date), with displays of Spanish Jamon Serrano, Manchego cheese, Manzanita olives, tapas and pintxos. The small bites are offered at the standing-room-only bar or the outside café tables on Yanonali Street.

Several works of original art have been installed at Loquita, again representing both traditional and modern Spain.  An original 19th century oil painting of St. Barbara adorns a wall in the dining room, salvaged from an old church in Argentina. A continuously running slideshow of black and white art photography from Spain is shown on an original brick wall in the main dining room.  A series of seven 150-year old solid copper-brass paella pans are mounted on a wall across from the kitchen. Upon entering Poquita Pintxos Bar, one is overtaken by a beautiful large-scale mural by Indian-born Kaveri Singh of Calabasas. Kaveri’s graceful hand is expressed throughout the flowering work.  A steel chandelier, fabricated by local artist Robby Van Aacken, is patterned after candle-filled altars in Spanish cathedrals. The fixture circles the Pintxos Bar, creating a magical, mystical space. An original pressed-plywood carving of a bull that stands atop the outdoor banquette, commissioned from local artist and Santa Barbara City College instructor Luis Velazquez. 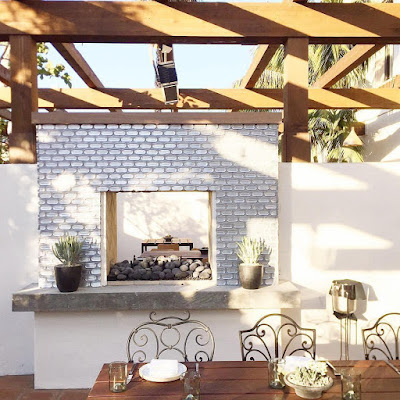 
A large vault door leads outdoors to the patio, casually arranged with Brothers of Industry tables set with vintage wrought-iron chairs. The patio is bathed in crisp white stucco, illuminated by string lights recreating a summer fiesta. Reminiscent of the small coastal fishing villages of the country, the area is landscaped with Mediterranean plantings – jacaranda and cassia trees, bougainvillea, succulents, palms and flowering vines. Warmth is provided by a cozy fire pit and a large dual fireplace, both whimsically tiled in repurposed sardine tins honoring the time-tested tradition of preserved foods from Spain. Sharing the joint fireplace is an adjacent private outdoor dining room for social or business gatherings.

Acme Hospitality has won numerous awards and accolades for its many concepts. Recognition includes “America’s Top 100 Wine Restaurants” from Wine Enthusiast for both The Lark and Les Marchands, 2013-2016; “Top 100 Hot Spot Restaurants in America” for the The Lark by Open Table; and “10 Hottest Restaurants in Santa Barbara” by Zagat for Lucky Penny. Loquita promises to deliver the outstanding food, wine, cocktails, service and beautiful interiors for which the Acme Hospitality family is known.

Looking for your Dream Home and Montecito lifestyle?