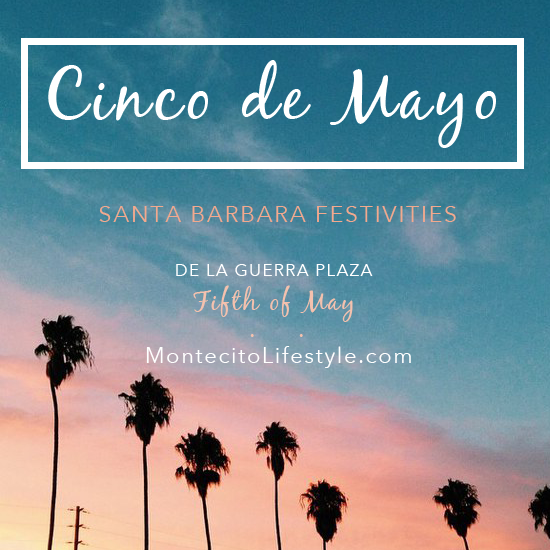 People travel far and wide to celebrate this fun filled festivity of Cinco de Mayo in the highly sought after travel destination of Santa Barbara and Montecito. Here's a few reasons why....

What is Cinco de Mayo?


Every May, Santa Barbara celebrates its Spanish heritage with the extraordinary Cinco de Mayo Festival at De La Guerra Plaza. This year’s festivities are fast approaching, and they will draw thousands of locals and visitors. With live music and delicious cuisine from an array of food vendors, this festival is the best place to be on the Fifth of May.

Where & When is Cinco de Mayo?

Located in downtown Santa Barbara, De La Guerra Plaza is a haven for Latino culture in Southern California. It also hosts the Old Days Spanish Fiesta every August—one of the region’s most popular annual events. On May 5th, the city will commemorate the Mexican defeat of the French in 1862 and celebrate the country’s heritage.

With such a strong Mexican culture throughout the city and state, a Cinco De Mayo celebration in Santa Barbara is as authentic as anyone will find in the United States. In the past, festival-goers have enjoyed everything from confetti-filled eggs to live Mexican music to delicious taquitos, tamales, and grilled corn on the cob.

The city of Santa Barbara even throws in a few extra fun for everyone attractions, like the rock climbing wall which has made appearances at festivals past. To take part in the fun this year, just head over to De La Guerra Plaza on Thursday, May 5th.

With musicians jamming in the plaza, and chicken and beef simmering on the grill, this year’s Santa Barbara Cinco De Mayo Festival promises to impress.

(pronounced: [ˈsiŋko ðe ˈmaʝo]; Spanish for "May 5th", or literally, "Five of May") is a celebration held on May 5. The date is observed to commemorate the Mexican army's unlikely victory over French forces at the Battle of Puebla on May 5, 1862, under the leadership of General Ignacio Zaragoza Seguín.

Don't miss out on all Santa Barbara has to offer in this fun filled festival. For more information on the Montecito and Santa Barbara lifestyle and Real Estate, click here to contact Susan Pate or visit MontecitoLifestyle.com.