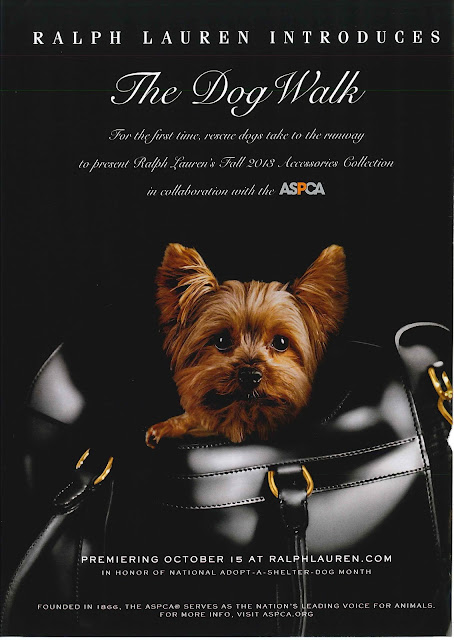 Leader of the Pack
Ralph Lauren's new campaign rolls out accessories for a cause.
Follow us:  @harpersbazaarus on Twitter  |  HarpersBazaar on Facebook
Visit us at  HarpersBAZAAR.com
"Dogs have always been a part of the Ralph Lauren culture," the designer says. They've made regular appearances in campaigns (and the brand's clothes), with ads starring golden retrievers lounging by fires and twin terriers sporting polo shirts. And since 1982, when a stray wandered onto Ralph and Ricky Lauren's RRL Ranch outside Telluride, Colorado, and pulled on the couple's heartstrings, canines have been more than company emblems, they've been among their closest companions (they currentlyhave a Yorkie, Bikini).

So it's fitting that Lauren is showing his love for the species with "The Dog Walk," a video that highlights the brand's accessories from a dog's-eye view. Products include not only the requisite shoes and Yorkie-friendly handbags but also proper carriers and chic leather leashes. The video shows Ralph Lauren–clad models promenading their pups through the streets of New York and Paris. (Apropos, the canine talent were all rescue and ASPCA dogs, and have been adopted since the shoot.) "The Dog Walk" debuts October 15 on  Ralphlauren.com, and 10 percent of sales from some of the featured accessories will be donated to the ASPCA in celebration of the organization's Adopt-a-Shelter-Dog Month. In the U.S. alone, more than three million adoptable pooches enter shelters every year. "We would do anything to save a dog," Lauren says.
Pictured above: Behind the scenes at "The Dog Walk" shoot
To read the full story, subscribe to Harper's Bazaar.
By Christine Whitney
Read more:  Ralph Lauren The Dog Walk Campaign - Ralph Lauren Handbag Campaign 2013 - Harper's BAZAAR